THE ABOMINATION THAT IS WHITELEE WINDFARM !

Scottish Power still publicise that Whitelee Windfarm has an “…average capacity factor of 27%...” – But this is the reality of metered generation: 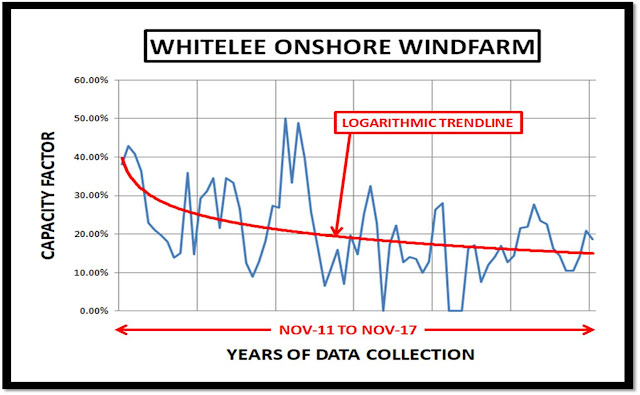 Wind farms were paid more than £100 million in 2017 to switch off their turbines. Astonishingly, windfarms receive on average 40 per cent more when switched off than when they are generating electricity.The National Grid pay the windfarms, but it is added to electricity bills of consumers.

“…The topography of the area is of a relatively flat plateau with occasional hills rising above the flatter plateau landmass, all of which is overlain with deep peat, in some places reaching down past 8 meters………. No-one knows exactly when blanket bogs began to form but its accepted that it was somewhere between 6000 and 9000 years ago…”
WHITELEE LANDSCAPE - BLANKET BOG

Whitelee would not pay back its Carbon Debt if it operated for 100 years!!!

How many more onshore windfarms are worsening our greenhouse gas emission, when we are paying through the nose for them to supposedly improve matters???
at 09:50